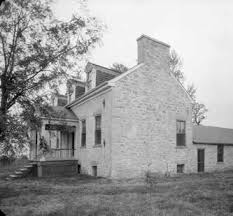 Home. The final entry of William M. Campbell’s journal written on October 8, 1829 simply says “home”. Archer Alexander was a member of that caravan from Virginia to Missouri of 55 people, of which 25 were enslaved.

On October 25, James H. Alexander and his wife Nancy McCluer Alexander joined the Dardenne Presbyterian Church, in St. Charles County Missouri.* On their journey from Virgina to Missouri they had brought their seven slaves, one of which was Louisa wife of Archer Alexander. Louisa had been inherited by Nancy McCluer when her father had passed away in 1822. Their children were John McClure Alexander, William Archibald Alexander, Agnes Jane Alexander and Sarah Elizabeth Alexander. In the 1830s cholera was sweeping the countryside and their mother Nancy would die in 1833, and their father James would die in 1834. They left behind four orphans all under they age of ten. Their father would appoint James Campbell, Executor of the estate of several hundred acres and all of the enslaved property they owned. They were not to be sold, but be leased and used for the benefit of the children. William Campbell would return children to Virginia, where their Guardian Alexander B. Stuart, would raise them, until they were old enough to manage their own property.

Archer was put in charge of managing the Alexander slaves, while Campbell was gone, who were given the task of building a new stone house for James Campbell. Working with the Pourie brothers, stonemasons who had been brought from Ireland, they completed a large two and one-half story home on the Booneslick Road. When it was completed the former log building, which had served as a first home for the family, would become the slave quarters. Also on the property were several barns, and an ice house. Campbell would return and live with James, becoming a pro-slavery State Representative for St Charles County. Eventually he would move to St. Louis, serve as a State Representative there as well, while continuing to serve as executor of James Alexander’s estate.

By 1843, we do know that Richard Hickman Pitman had become the owner of Archer, because he has taken out a loan and used his enslaved property, with Archer Alexander among them, as collateral on a loan. Seven of Archer and Louisa’s children will be listed with their values on the preposed dispersal of the Alexander estate. In order to divide the estate with an equal value for the four Alexander siblings Archer’s and Louisa’s family will be split.

The Dardenne community and St. Charles County experienced a large influx of German immigrants beginning in the early 1830s. Many of them will settle among the earlier slave owners and tensions will rise. The Dardenne Presbyterian Church will experience a conflict between those that consider themselves “old school” or pro-slavery and “new school” with their opinions, leading up to the Civil War.